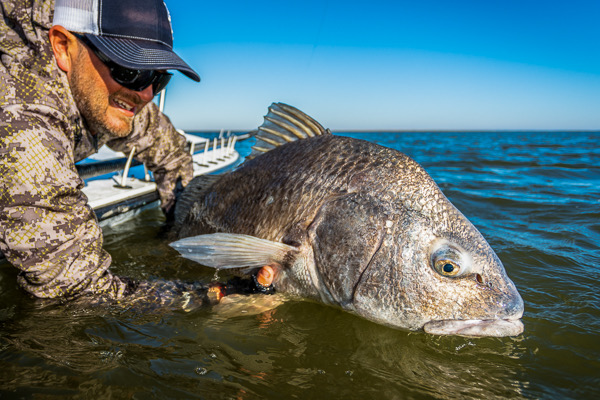 January has fished well around the fronts- the fish are super stable and have found their winter homes, when the sun is out they are suspended nicely and have been getting multiple bulls and black drums daily. I am guiding through the end of January in Louisiana and have a couple open dates still and Read More

The temperatures are changing and the fish are moving into the Everglades and surrounding inshore waters! Big Snook can been seen cruising the outside shorelines in search of bait. They are much like bears going into hibernation- they have to eats lots of food before the cold days and nights of the winter tine when Read More

The Time is Now!

Tarpon season is heating up and now which seems to be the last cold spell in front of us its going to be a long run of tarpon for the next several months! What are great time of year these giants swim across our paths and produce some of the best fishing anywhere in the Read More

The dog days of summers end are in sight here in the everglades and Naples fishing guide. I love this time of year in September-November as all of the visitors do not come to The Everglades and Ten-thousand islands until after the holidays of Thanksgiving and X-mas. It also means the big snook are Read More

Planning your fall/winter trip to Florida hopefully involves some fishing and if it does somewhere deep in the Everglades should be on your list. Definitely the top winter fishery while the Keys rival the location in the early summer. I pick up on Chokoloskee Island which is a 5 minute drive from Everglades City. Read More

Everglades Fishing Guide. Late summer and fall is a special time and place for Everglades fly fishing guides. Most of the big fish are on the outside of the ten-thousand islands and everglades river mouths. This is a great time to fish early mornings and late afternoons for rolling and tailing fish. I love Read More

Here is a look at the upcoming fishing season! September-February (Everglades National Park- Chokoloskee) Will be great time to target big snook, all tarpon sizes, redfish, jack crevelle on the outside of ten-thousand islands and in the rivers of the Everglades, a true wilderness experience. The bait will be pushed nearshore which causes the game Read More

The summertime is a great time for fly fishing the Everglades and Naples area! Plug fishing with top-waters and twitch baits is Very stable early in the morning with top water and with twitch baits when the sun gets up during the day. I love to show clients how to throw traditional “plug gear” Read More

Post storm fish have been on fire! Everglades and Naples fly fishing has been productive for mid-sized tarpon, big snook and redfish. With the tannic water these fish will be on the top and ready to eat. Its a great time to fish The Everglades when everyone is dealing with wind, rain and other Read More